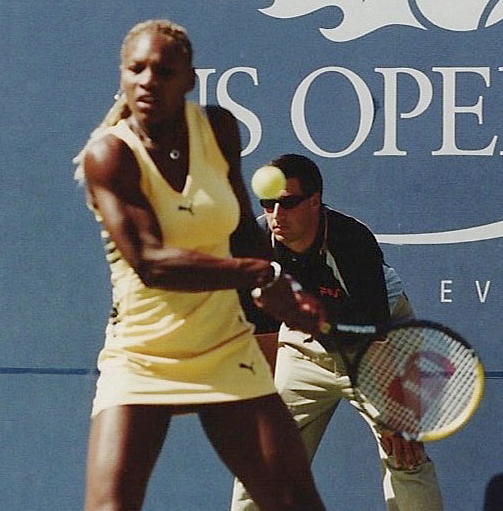 “We have watched [Serena Williams] grow from a baby girl in her sister’s shadow to a grown woman standing in her own light,” said TV host Melissa Harris-Perry in support of the world-renowned athlete, who has received an enormous white backlash in the wake of her Wimbledon victory.

In an era when athletes of the new generation have always found a way to disappoint, whether off the field or crumbling under the pressure of the media’s harsh critique, tennis superstar Serena Williams continues to rise above it all, being a role model that the youth should follow.

Williams continued her dominance in women’s tennis this past Saturday as she claimed her sixth Wimbledon championship. That victory marks 21 Grand Slams overall, and four in one calendar year. Great acclaim and awards are what Williams certainly deserves, but the fact she is playing at this level despite the backlash and negativity is unbelievable.

Human nature and the patterns seen in athletes and celebrities have shown that many have difficulty dealing with negativity and criticism. LeBron James is a perfect example. He is one of the most popular athletes in the world, but not until 2012, when he won his first championship, was he able to adjust to the naysayers and backlash. Before the championship, James allowed the different media outlets to get inside his head, affecting his performances for the worse on the court.

Allowing the media to affect in-game performances or even the way one acts off the court has never been an issue for Williams. This attitude is why she is well on her way to becoming perhaps the greatest woman athlete ever, and her attitude should be admired by the youth.

The New York Times came under heavy criticism for publishing an article about women’s body image “issues” in tennis today. The article came across as a diss to Williams and compared her to women she competes against.

Williams “has large biceps and a mold-breaking muscular frame, which packs the power and athleticism that have dominated women’s tennis for years. Her rivals could try to emulate her physique, but most of them choose not to,” the article says.

Certainly, Williams has a strong physique, but nothing about it is unladylike. It is ridiculous that Williams’ body is being looked down on instead of applauded for being visible proof of her dedication. Not everyone possesses the body Williams has, in part because most of her competitors do not put in the time and effort she does.

Yet, social media exploded with negative comments. At the same time, Williams’ defenders made their opinions known.

Agnieszka Radwanska, the 26-year-old Poland native, is one of the best tennis players today. She stands 5 feet 8 and weighs a mere 123 pounds. Nobody criticizes her for being too small, but Williams receives enormous backlash for her muscular physique.

In fact, Radwanska’s coach, Tomasz Wiktorowski, had some words that were harsh and undoubtedly aimed at Williams. “It’s our decision to keep her as the smallest player in the top 10. Because, first of all, she’s a woman and she wants to be a woman,” Wiktorowski said.

Harris-Perry voiced strong opinions on her MSNBC television show about the critique Williams received from Wiktorowski and The New York Times.

“New York Times, we are not amused,” Harris-Perry said. “The impulse to publicly dissect Black women and offer commentary on our bodies as somehow bizarre, unfeminine, grotesque and worthy of only shock is a sickening holdover of the 19th century scientific racism that ripped Sarah Baartman from her home in South Africa and put her on display semi-naked throughout Europe as a so-called ‘Hottentot Venus’ until her death in 1815.”

After stating her displeasure with The New York Times, Harris-Perry went on to explain why we embrace Williams beyond just the tennis court.

“We are not ashamed of Serena; we are proud,” Harris-Perry said. “We are thrilled that she does not aim to be the smallest player in the game and instead embrace the enormity of her body, talent and influence. We appreciate that she takes chances, plays through pain, stays connected to her community and refuses to be defined by the hateful ranting’s of the Twitterverse or the appalling commentary of much of the mainstream media.”

Harris-Perry was spot on in her analysis of the situation and the impact Williams has had on and off the tennis court. Although media outlets will continue to throw harsh commentary, this criticism is hardly anything new for Williams. Her story is one the youth can relate to on many different levels. Nothing is perfect in life, and everyone has to face tough situations. It’s how you handle those moments that make people remember you. If Williams wasn’t a tough-skinned, energetic ball of energy who couldn’t care less what anyone thinks, we could be having a completely different conversation about her.

Instead of being arguably the greatest woman athlete ever, the conversation could have been “Serena Williams: The Wasted Talent.” Because this alternate outcome is not the case is why her story holds so much importance. She allows nothing to affect her performance, and she has fun while making the critics suffer.

In the past few years, Williams has crashed a beach wedding, briefly dated popular rapper Drake and was even Crip Walking after a victory. In her storied career, she has never been involved in serious misconduct or crimes that plenty of her peers have unfortunately been a part of. She has proved to be a consistent role model for young women and the youth for years, and she should be celebrated.

iThere are no comments

Begin typing your search above and press return to search. Press Esc to cancel.